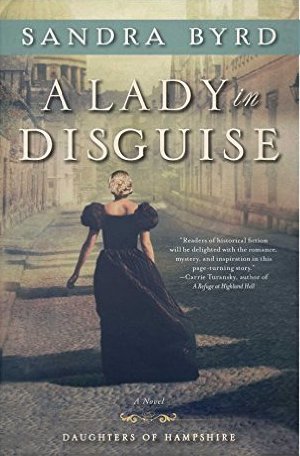 Every year, an estimated 14,500 to 17,500 people are brought into the United States as slaves. Many of the women and children are forced to serve the sex industry.

Unfortunately, this problem isn’t unique to our nation or generation. Even in Victorian England, orphans and other vulnerable girls were lured into prostitution.

In her latest release, Sandra Byrd tackles sex trafficking with the elegance I’ve come to expect from her historical fiction. (Tweet that!) Set in London in the late 1800s, A Lady in Disguise is the third novel in her Daughters of Hampshire series.

Like my debut novel, Snow out of Season, A Lady in Disguise begins at a funeral:

“I stood, that bleak day, in the graveyard in the village near Winton Park. The chapel’s stone gargoyles, pitted and blinded by the elements, nonetheless mocked our mortality with their jeering grins.”

Years after losing her actress mother, Miss Gillian Young must now mourn the death of her father too. But the man she remembers as a devoted dad and a respected constable is now accused of being a criminal.

As a costume designer, Gillian is dependent on the patronage of polite society. Will this scandal cause her to lose her position at the famed Drury Lane Theatre Royal? Worse, will it jeopardize her budding romance with the dashing Lord Lockwood? 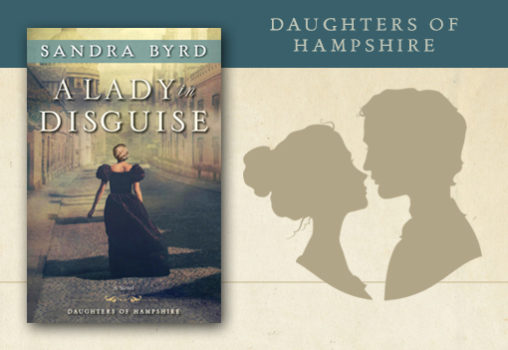 To honor her mother’s legacy, Gillian shelters orphaned girls and trains them in the art of dressmaking. But unscrupulous men have more insidious plans for these budding beauties. She follows their trail—as well as a photograph left behind by her father—to a house of ill repute.

Despite the mounting evidence, Gillian becomes more and more convinced of her father’s innocence. But as she searches for more clues and tracks down more loose ends, danger dogs her at every turn. Will she have to sacrifice her life to restore her father’s good name?

A Lady in Disguise is another beautiful Sandra Byrd story to savor. With atmosphere, poetic prose, a worthy heroine, and an intricate mystery, this romance resonates. 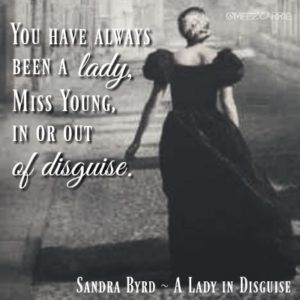 Like all Byrd’s novels, meticulous research adds an air of authenticity to every page. With Gillian, you’ll hurry down London alleys, alter costumes in Drury Lane, and explore a crumbling mansion in the dead of night.

Want to learn more about A Lady in Disguise and Sandra Byrd’s other books? Check out our interview here!