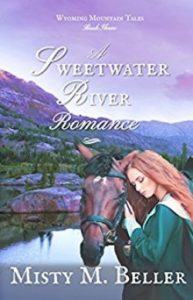 A Sweetwater River Romance by Misty M. Beller — Rocky Ridge Stage Stop Manager Ezra Reid is put in a difficult situation when two ladies show up on his remote doorstep seeking refuge, one of them being Tori Boyd, the mysterious correspondence partner writing him letters for over a year now. Tori refuses the most proper solution to their circumstance—marriage. But when danger follows, it will take a lot more than luck to ensure Ezra’s heart is the sole casualty.

High as the Heavens by Kate Breslin — In German-occupied Brussels, a WWI nurse struggles to keep two life-threatening secrets. She’s in league with the British Secret Service, and she’s harboring a wounded British pilot.

The Captain’s Daughter by Jennifer Delamere — When a series of circumstances beyond her control leave Rosalyn Bernay alone and penniless in London, she chances upon a job backstage at a theater that is presenting the most popular show in London. A talented musician and singer, she feels immediately at home and soon becomes enthralled with the idea of pursuing a career on the stage.

A hand injury during a skirmish in India has forced Nate Moran out of the army until he recovers. Filling his time at a stable of horses for hire in London, he has also spent the past two months working nights as a stagehand, filling in for his injured brother. Although he’s glad he can help his family through a tough time, he is counting the days until he can rejoin his regiment. London holds bitter memories for him that he is anxious to escape. But then he meets the beautiful woman who has found a new lease on life in the very place Nate can’t wait to leave behind.

Grounded Hearts by Jeanne M. Dickson — Set in WWII, an Irish woman must choose between her heart and her freedom when she finds a downed combatant pilot.

Mail Order Sweetheart by Christine Johnson — Singer Fiona O’Keefe must make a wealthy match to support her orphaned niece. Musically talented Sawyer Evans is a self-made, but not wealthy, sawmill-manager. Unwilling to live off his father’s railroad fortune, can Sawyer prove to Fiona he’s the man she needs when she’s already determined to mail-order a rich husband?

Freedom’s Price by Christine Johnson — On a quest to find her mother’s family in Louisiana, Englishwoman Catherine Haynes enlists a dashing Key West man seeking revenge for his own family. When an incredible secret comes to light, she and Tom will face a choice. Can they relinquish their dreams to step forward in faith?

Sutter’s Landing by Betty Thomason Owens — Still reeling from tragic losses, Connie and Annabelle Cross face life with their signature humor and grace, until fresh hope arrives on their doorstep.

Seven Brides for Seven Mail-Order Husbands Romance Collection by Susan Page Davis, Susanne Dietze, Darlene Franklin, Patty Smith Hall, Cynthia Hickey, Carrie Fancett Pagels, Gina Welborn — Meet seven of Turtle Springs, Kansas’, finest women who are determined to revive their small town after the War Between the States took most of its men. . .and didn’t return them. The ladies decide to advertise for husbands and devise a plan for weeding out the riff raff. But how can they make the best practical choices when their hearts cry out to be loved?