I still remember the lovely dinner I shared with Brandy Vallance at the Writing for the Soul conference and the moment Jerry Jenkins announced she won the 2013 Operation First Novel contest. Today, I have the privilege of interviewing this award-winning, Christian romance author. 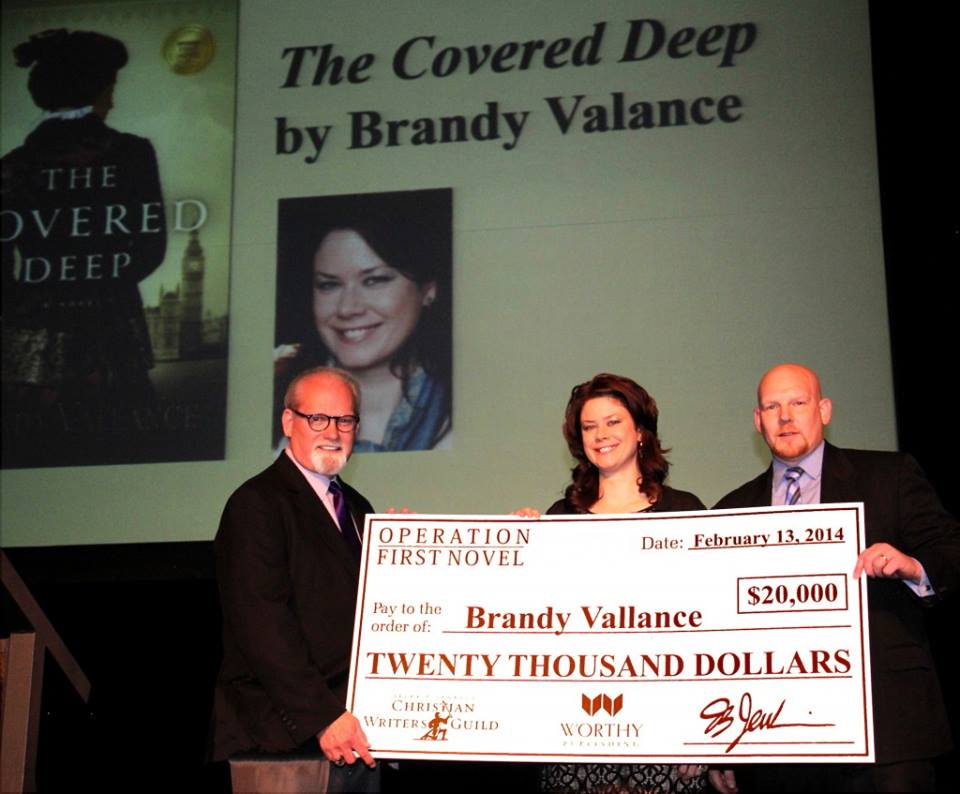 Hi, Brandy! Can you tell us about your journey from a girl with a dream to an award-winning author? How many years did it take?

Hi, Christy! Thank you for inviting me on your blog today. My journey to traditional book publication took fourteen years. There was a lot of learning involved and eleven drafts of The Covered Deep. I did freelancing for a time and had fifty articles published. The best part of the journey was all the friends I met along the way. And now that my first book has been published, the same holds true. I love meeting fellow writers and readers.

When someone connects with something you write, it’s magic. (Tweet that!)

When you walked across the stage to claim your $20,000 check, you looked stunning. Did you have a feeling you were going to win or were you completely surprised? What went through your mind when they called your name?

Thank you, Christy! Wow. What a question. I dreamed a lot about that evening before it happened. I prayed a lot. I wanted it so, so badly. Because of all the other disappointments I had had, I was almost afraid to hope. I had mentally prepared myself not to win. That way, if I didn’t win, I wouldn’t be crushed.

However, I also prepared myself to win and took a big risk. I invited a complete entourage of friends who had been most influential in my writing journey. Going into it, I knew we’d either be celebrating or commiserating afterward in the parking lot. To tell you the truth, one of my primary thoughts that night was that I didn’t want them to be disappointed.

When Jerry Jenkins announced my name, everything just fell into place. I was really calm because even then the reality hadn’t hit me. It took a couple of days. Even now when I look at the cover it all seems surreal.

How did you come up with the story for your winning novel, The Covered Deep? Did you have a similar experience as the heroine (but, perhaps, not quite as dramatic)? 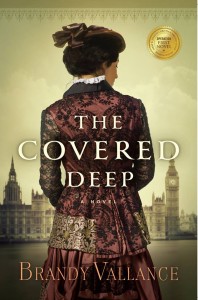 As I mentioned earlier, The Covered Deep morphed over eleven different drafts. Bianca started out as an English aristocrat, if you can believe that! Eventually, the bits and pieces of who she became all fell into place.

One day in a vintage photography store, I stumbled upon a photograph of a woman. It was like a lightning moment for me. I couldn’t stop staring. The longer I looked, the more she spoke to me. My imagination went wild. You can see the photograph on my Pinterest board.

I gave Bianca the hometown of Portsmouth, Ohio, where I lived for a little while. I spent some pretty magical summers around that area.

I stayed on my great aunt and uncle’s dairy farm, which included an old stagecoach halfway house. For fun, I’d jump off the stacked, high hay bales down to the hay piles below.

I’d roam the hills and visit the old cemeteries just to read the poetry on the headstones. My dad and I spent a lot of time driving through Shawnee Forest, which Bianca references in chapter one. There are also a lot of Indian mounds in that area, which Bianca talks about too. So, some of Bianca’s background definitely came from my experiences.

As far as the story, that evolved bit by bit. I knew I wanted the hero to be an Indiana Jones type.  I also knew I wanted him to be English. 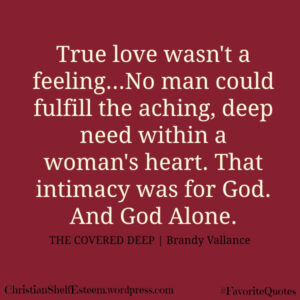 I started imagining interesting ways to place opposing characters together. I asked myself a lot of questions. What would happen if an Appalachian woman were thrown into the opulence of London? What if Bianca’s hero had a secret past?

With every question I tried to push the story deeper and explore more. I added the Holy Land to the story simply because I wanted to go there. In the end, that element added a lot to the motives and story arcs of the characters.

One of the best things about writing is when your subconscious clicks and the characters begin talking to you. In the end, I just had to write their journey—their struggles, dreams, and failures. A couple of times I rebelled against what they were saying because it was scary for me to write. It wasn’t until I let go of fear that I was really able to write The Covered Deep. I know that probably sounds strange to non-writers.

Ultimately, I think it’s about trusting ourselves. Many times we subconsciously know what has to be written. I have to remind myself of this every time I sit down to write. I always tell myself that if a scene or book doesn’t scare me, I haven’t done my job. When you get the feeling that you’re naked for the world to see, that’s the point when you’re starting to get it right.

Did you get to travel anywhere exciting to do research?

I did go to England, Scotland, and Wales in 2011, but that was after I had already written The Covered Deep. It was a surreal moment to be able to stand in the British Museum in London where I had Bianca and Paul first meet. All the characters of The Covered Deep became so real to me that I could almost see them walking around London. Even now, hardly a day passes without me thinking of them all.

Thank you so much for taking the time to share your heart with us today! Where else can they go to learn more about you and your inspirational historical romances?

Readers, check out my review of the novel that won Brandy Vallance a publishing contract as well as a $20,000 check! Just click “The Covered Deep by Brandy Vallance!”