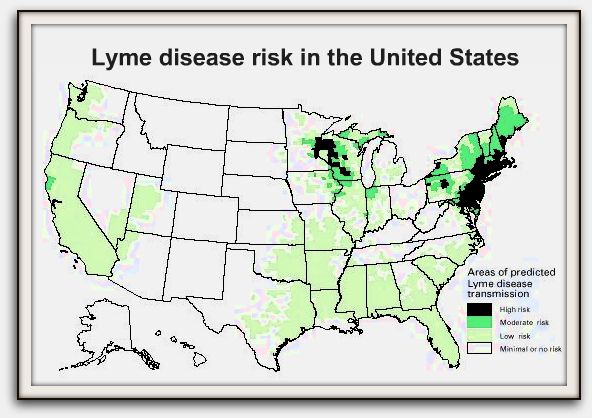 Since we moved to Maryland in May 2015, one of mine has been that my husband, daughters, or I would get Lyme disease.

We had traded the cold, crime, and bad traffic of Chicago for an adversary the size of a sesame seed.

How could we fight a foe we could barely see?

As you may know, Lyme disease is spread through the bite of infected blacklegged ticks. Also known as “deer ticks,” these bugs are much smaller than other ticks. Depending on the stage of their development, they range in size from a pinhead to an apple seed.

But the damage they cause can be life-changing. Our neighbor had to retire early and still suffers from pain in his back and knees. A sweet friend from church struggles with brain fog, debilitating fatigue, and physical limitations. Combined, these problems led to her having to go on disability.

In both their cases, they had Lyme disease for years before it was diagnosed. And untreated Lyme disease can cause arthritis, meningitis, nerve paralysis, and even heart problems. 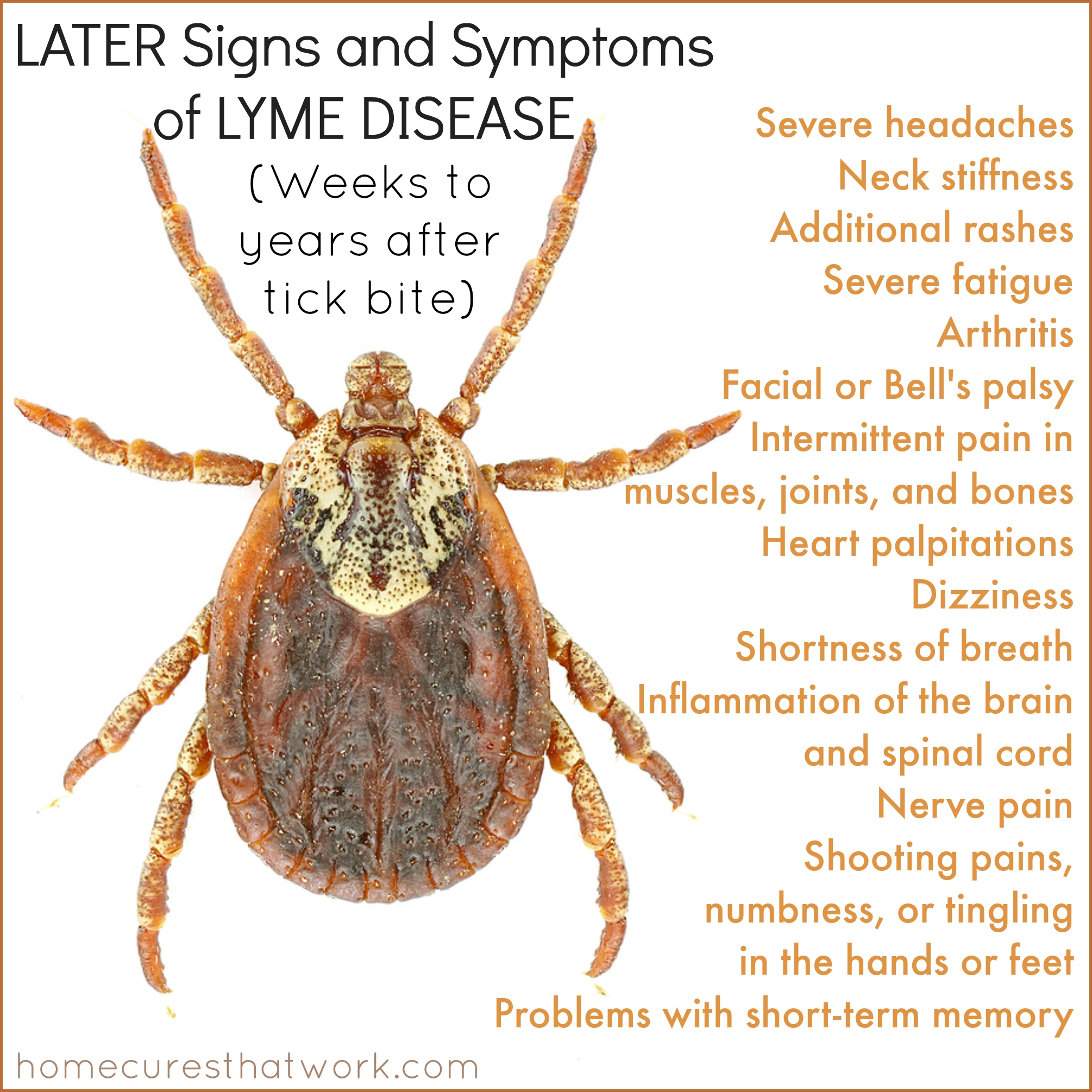 In contrast, the CDC says, “People treated with appropriate antibiotics in the early stages of Lyme disease usually recover rapidly and completely.” Hence, the incredible importance of discovering the disease quickly. 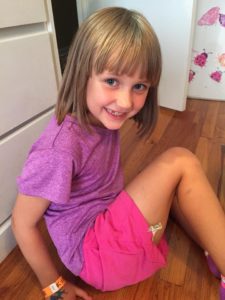 Michaela on her seventh birthday–Tuesday, August 28, 2018–with her baby bearded dragon.

Five years ago, my father also contracted Lyme disease, but his story gives us hope. Because he realized what it was within a week, he was able to recover from it without any permanent damage. (Well, the Lyme did possibly cause his hypothyroidism, but that’s another story.)

His story and ours are why I’m writing this blog: to help you recognize the disease early before it wreaks havoc on your health. Even more important perhaps, for parents, is to recognize it in your little ones.

Our seven-year-old, Michaela is strong, energetic, and independent. She delights us with her inventiveness, her creativity, and her surprising and perceptive observations. 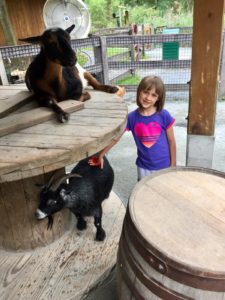 Michaela at the Maryland Zoo the day we discovered she was sick.

But winter mornings with her can prove challenging. Even if it’s literally freezing outside, she almost never wants to wear a coat. To prove she doesn’t need one, she’ll stand on our deck for .2 seconds and say, “See? It’s not cold!”

But on the way home from her late August birthday party, she started complaining she was cold. The next day, on the way home from the zoo, she said the same. That evening—the Friday before Labor Day—she was hot to the touch. I took her temperature, and it was 103.4 degrees.

My husband, Mark, checked her from head to toe and found nothing unusual. Since her doctor’s office had closed by that time, he took her to a clinic, and they concluded she had a virus.

HOW A RASH RIGHTED A WRONG DIAGNOSIS

On Labor Day, after days of no symptoms except chills, fatigue, and fevers, I discovered a rash. At first, I thought it might just be a pressure mark from her long nap on Mark’s recliner. The middle of the night proved that theory wrong.

Just after midnight, Michaela came into our bedroom crying. Her head hurt, and her fever had spiked to 103.9. I checked the oval red mark on the back of her upper thigh, and it was still there. 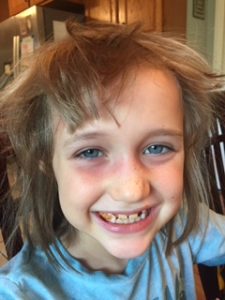 Michaela a day after starting the antibiotics. You can still see the red circles around her eyes, but her bright smile is back and her hair is messy, because she was playing superheroes.

I gave her medicine and a lukewarm bath and left a voice mail for the on-call pediatrician. When he called back, he advised me to bring her in first thing in the morning.

I did, and another doctor examined her and ruled out common causes of fever. Then she called in a third doctor to check out the rash, which was clearing in the center. They agreed it was the Lyme disease rash and started her on antibiotics.

(Diagnostic blood tests aren’t usually accurate until four to six weeks after infection, so they start treatment for early Lyme disease based on your signs and symptoms.)

Most importantly, since the doctors think we caught it very early, they don’t predict any long-term problems.

Because I want you to catch it early too, here are my main tips:

First, don’t just check for the Lyme disease rash once. The circular red area usually takes 3 to 14 days to appear after the tick bite and can appear as late as 30 days later. Some people never get the rash.

Second, don’t forget to check your scalp and areas where your skin creases when you stand.

Third, don’t assume it has to look like a bull’s-eye. The erythema migrans can take many forms (see the chart below). 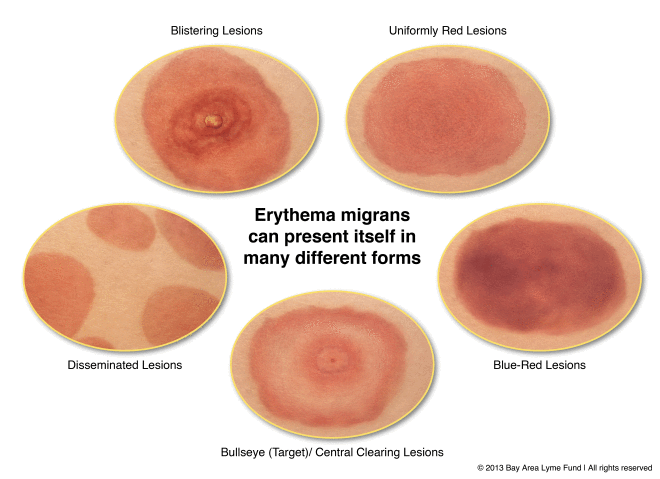 In my dad’s case, his rash looked like a normal rash but then spread to other parts of his body. In Michaela’s case, the classic Lyme disease rash didn’t appear until several days after her symptoms started. If your fever or a loved one’s persists, check for the rash again and see your primary care physician.

So now we know a little more about how to catch Lyme disease early. But how do we prevent ourselves and our loves ones from getting it in the first place? Click here to read my next blog!

22 thoughts on “How the Lyme Disease Rash Righted a Wrong”