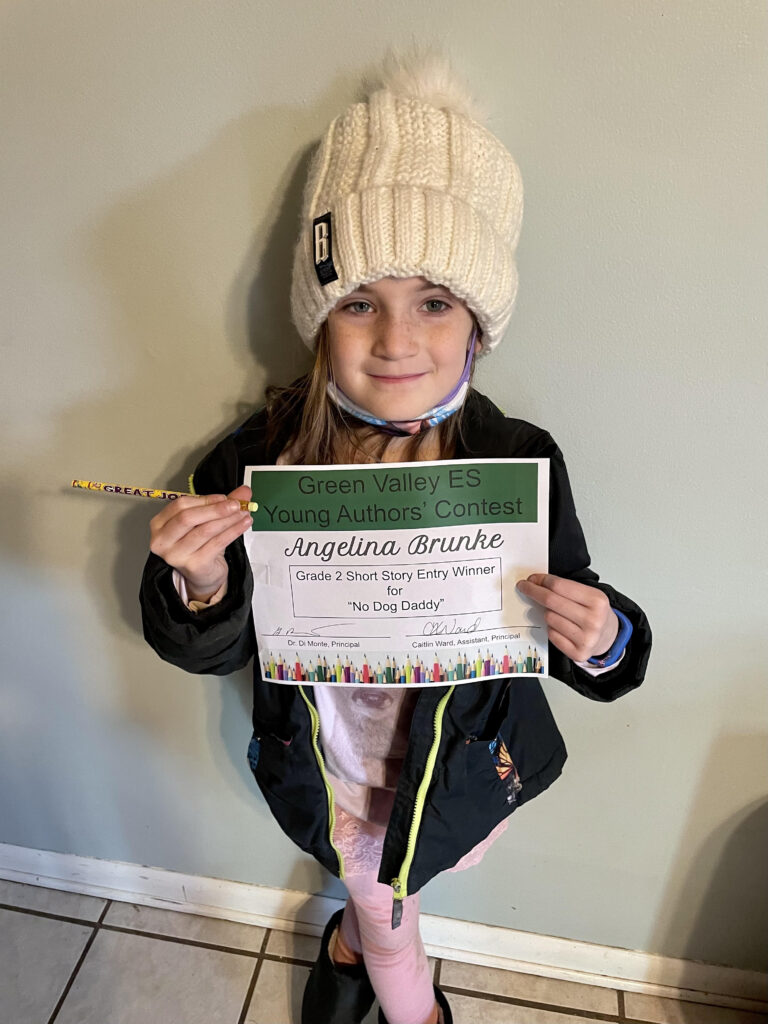 This past fall, our seven-year-old returned from school wielding a flyer about the Young Authors’ Competition. For this contest, students could submit either a poem or a short story. Word count ranges varied by grade, and a winner would be chosen from each.

Angelina knew right away she wanted to enter the contest. That night, instead of reading before bed, she asked if she could start writing her story. Pen in hand, she started scribbling her thoughts in her journal.

In December, she submitted it. In January, she discovered she’d won first place in her school second in the whole county.

When I posted pictures of her and her award on Facebook, several people asked me to post her story. So, without further ado, here’s “No Dog Daddy.”

Once upon a time there lived a little girl. Her name was Angelina, and her sister’s name was Michaela. They really wanted to get a puppy, but the only problem was their dad. He didn’t want a puppy. He said that it would be too much work.

A few days later, it was Angelina’s seventh birthday party. At her party, her grandma handed her a piece of paper. Angelina didn’t know what it was at first. It had a picture of a puppy, a date, and the names of the puppy’s mom and dad. Then she realized that she was going to get a puppy!

Angelina started opening the rest of her birthday gifts. There was a puppy harness from her mom and dad, puppy bandanas from her aunt, and squeaky toys from her cousin. She was happy and excited. And then she realized that her dad agreed because she was seven now. 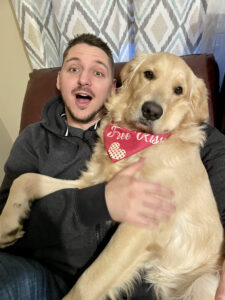 It took a while until they got the dog they wanted, and they named him Reilly. And now, they sometimes call him Baby Boy, Booboo or Bubba. They play fetch, tug of war, and sometimes they cuddle with Reilly. Michaela sometimes runs around their house and Reilly follows. Their mom sometimes talks and sings to Reilly. Angelina sometimes hugs Reilly for five minutes straight. But the one who cuddles and plays with Reilly the most is “No Dog Daddy.”