My husband, Mark, and I recently finished our first 5K, helping to raise $15,000 for women facing crisis pregnancies. This was the fifth annual 5K hosted by the Gabriel Network, a faith-based community of churches, businesses, and individuals that has helped thousands of women in D.C. and Maryland.

“We are the ‘What Now?’ organization after a mother chooses motherhood and embraces life,” said former board president Johanna Coughlin.

Through the Gabriel Network (GN), women struggling with unexpected pregnancies can receive free counseling, baby products, and even transitional housing. To raise support for these things, GN hosts several annual fundraisers. From galas and crab feasts to golf tournaments and 5Ks, they’re committed to raising the necessary resources to support women who choose life.

Last month, a forecast hurricane threatened to sabotage this year’s 5K, but volunteers and supporters encouraged people to pray. By the start of the event, the rain had stopped, but it was still damp and chilly at 50 degrees. Under an overcast sky, 47 of us ran 3.1 miles on a lovely trail around Lake Elkhorn in Columbia, MD. 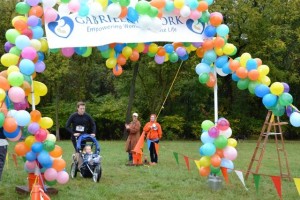 “I just recently started running, and this was my second 5K race,” said Columbia resident Tracey Cyr. “I really enjoyed participating . . . because I felt that I was supporting a great organization. Before the race began, when the director asked the runners to pray for the moms and babies, it made me feel that God put me there for a reason.”

A few parents pushed their toddlers in strollers while some older kids and teens jogged the course on their own.

“I love the Gabriel Network’s mission and what they do to show the love of Christ to women in need,” said 15-year-old Megan Tatum. “As a high schooler, sometimes it’s hard for me to know what I can do against issues like abortion. I’m too young to vote, and I don’t have a steady income…. This 5k was an opportunity for me to not only donate money, but set aside time to pray.” 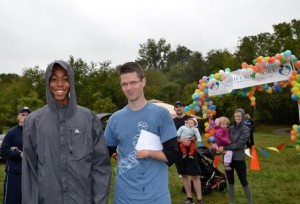 Though some of us walked part of the trail, seeing it as an opportunity to meet like-minded people, most jogged, and some ran to win. Ifeanyi Ezeh, another Columbia resident, finished first at 21 minutes and 20.9 seconds.

“This 5K was even more successful than last year’s,” said GN’s Executive Director, Stephen Wallace. “Our volunteer committee led by Tiffany Farley planned a great event, and our generous sponsors really came through. I think the threat of the weather kept a number of runners at home, but even with that the spirit of the runners was strong. There were a lot of smiles and even more prayers for our moms.”

Ways You Can Help

Want to help, but weren’t able to participate in the 5K? You can still donate online, volunteer, or partner with your church to adopt a woman in need. Discover all the ways you can serve—or be served—at GabrielNetwork.org.