In honor of Down Syndrome Awareness Month and the role Trisomy 21 plays in my novel, today I’d like to highlight some big dreamers with Down syndrome. 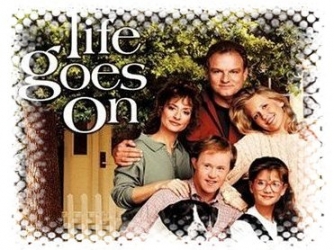 If you grew up watching Life Goes On, like I did, you probably remember Corky, a boy with Down syndrome. Chris Burke, who also has Down syndrome, played this character.

When Burke was born, his parents were told to put him in an institution. Instead, they raised him themselves, nurturing his gifts and encouraging his dream of becoming an actor.

After his first professional role in the made-for-TV movie Desperate, ABC executives were so blown away by his performance, they created Life Goes On with Corky as the starring role. But Burke’s success didn’t end there. He’s since appeared on many films, miniseries, and TV shows. He even played Taylor in Touched by an Angel and co-starred in the movie Jonathan: The Boy Nobody Wanted.

Burke’s success opened the door for other entertainers with Down syndrome. They  include Lauren Potter (Glee), Jamie Brewer (American Horror Story), and Luke Zimmerman (The Secret Life of an American Teenager). 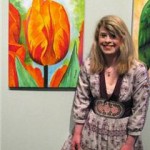 People with Down syndrome have also made their mark on the art world. Painter Bernadette Resha has been interviewed on NBC, PBS, and Prime Time Country, her work displayed in galleries across the country. 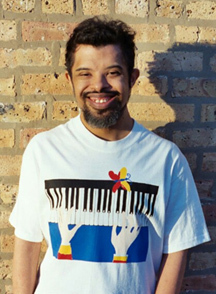 Canadian Jane Cameron’s designs were developed into tapestries commissioned by Mirabel Airport, Reader’s Digest Canada, and the office of the Prime Minister.

In 2002, he won the American Veterinary Medical Association’s national art contest. In 2010, he was chosen out of over a thousand professional artists to display his watercolors at ArtPrize, an international art competition.

While art has allowed Johnson, Resha, and Cameron to find a voice, Yizhou Hu finds his self-expression in music. Born in China in 1978, “ZhouZhou” grew up attending orchestra rehearsals with his cellist father.

One day, a documentary filmmaker noticed ZhouZhou copying the conductor’s movements. His assistant jokingly invited ZhouZhou to conduct the song. When he did, he left the orchestra stunned at his performance. ZhouZhou has since become an internationally-esteemed conductor. He’s even lead the Cincinnati Pops Orchestra and China’s National Symphony Orchestra. 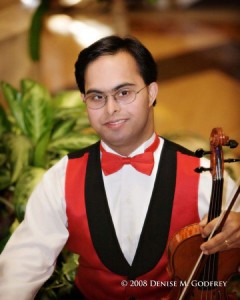 In 2006, he married Carrie Bergeron, a motivational speaker who also has Down syndrome. “There were two dreams in my life,” Desai told a crowd before his wedding day.1 “One was to become a professional musician. The other was to find a beautiful girl and get married.”2

Today, Desai has realized both dreams.